Manga and anime are the representative cultures of Japan.
The origin was the wooden two-story apartment called “Tokiwa-so” that was located in Toshima-ku, Tokyo.
The “Tokiwa-so” was recreated as a museum.

Tokiwaso is a legendary apartment where great manga artists lived together in their youth.

The original Tokiwaso was demolished in December 1982.
But Tokiwaso was rebuilt as a Manga Museum thanks to the support from many people.

2.Which manga artist lived in Tokiwaso?

The famous manga artists are as follows.

3.Tokiwaso Manga Museum is “reservation required” for the time being

Reservation is required for the time being to prevent corona.
Make a reservation from the official website of Tokiwaso Manga Museum

4. Take a time trip to Shiinamach (now Minami Nagasaki) in the Showa era 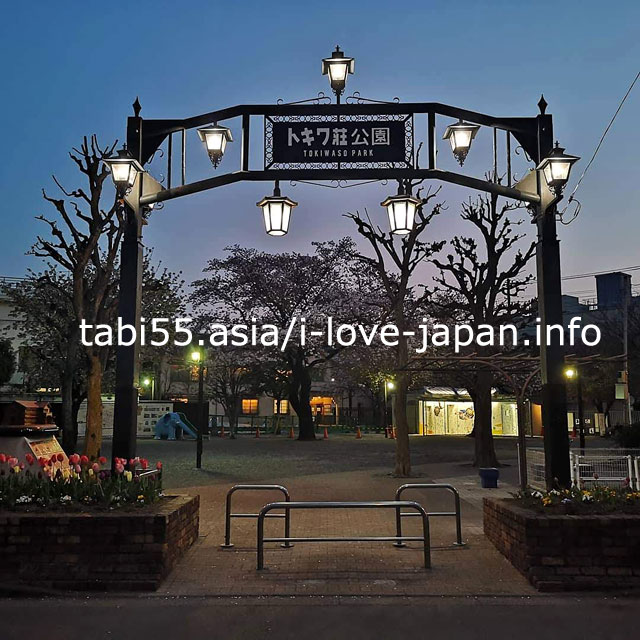 This is the entrance to Tokiwaso Park, where the Tokiwaso Manga Museum is located.
There is a path to the right of this. 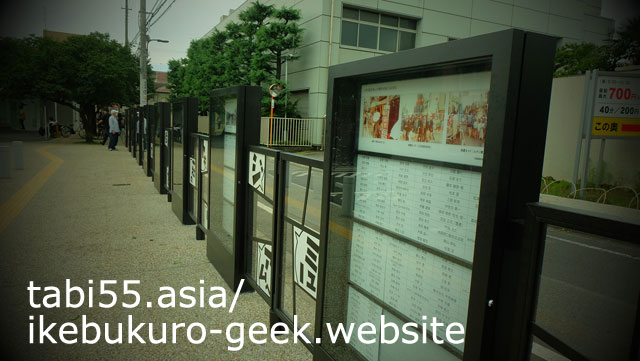 You can see pictures of ShiinaMachi (now Minami Nagasaki) when Tokiwa-so was located.
Below the photo, the names of the people who donated in order to reproduce the Tokiwaso Manga Museum are specified.

It seems that it has been reproduced with the help of many people. 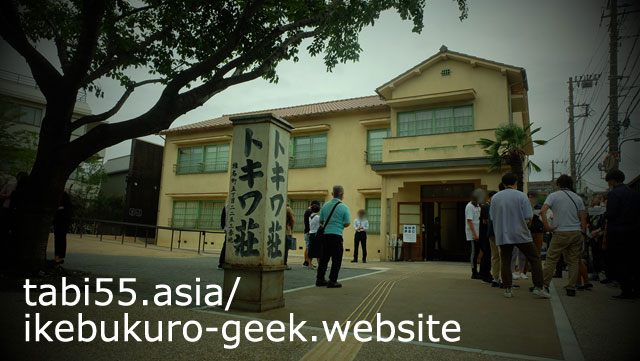 If you enjoy the time travel, it will quickly become the entrance of the Tokiwaso Manga Museum. 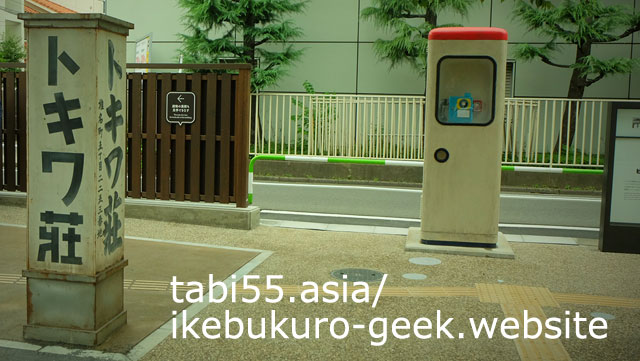 The phone box that Tokiwaso manga artists used to contact the editors.
They didn’t have a smartphone at the time…

Roughly speaking, the structure of Tokiwaso Manga Museum is as follows.

5-1.Reproduced from the entrance! Take off your shoes and go up the stairs. 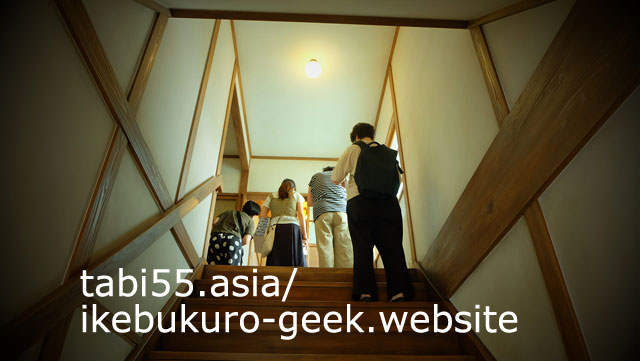 Just like when the manga artists lived, We take off our shoes and went to Tokiwa-so.
Even the sound of climbing the stairs is reproduced.

5-2.It seems to smell! Reproduction of Tokiwaso toilet 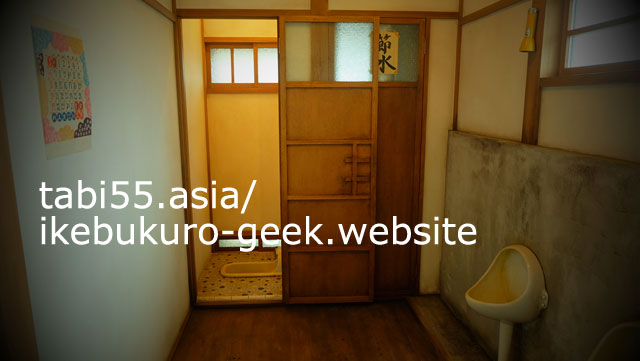 It is this toilet that they are looking into in the photo of the stairs.
It was common for private rooms to have no bath, toilet, or kitchen. 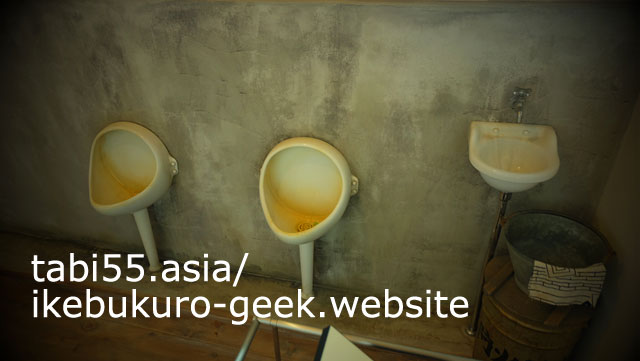 It seemed that the smell was being reproduced 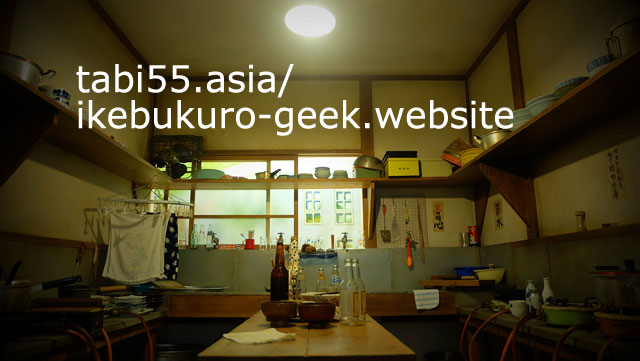 A communal kitchen where they may have prepared, cleaned up meal and brushed their teeth.
Up to that point, I think it’s normal usage.
Fujio Akatsuka and Shotaro Ishinomori seem to have been bathing at the back sink. 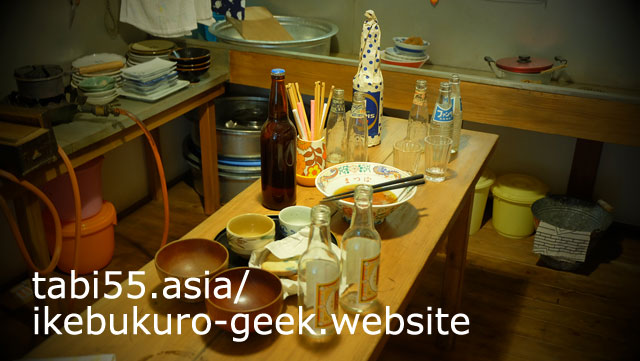 5-4.Reproduce the room of manga artists! 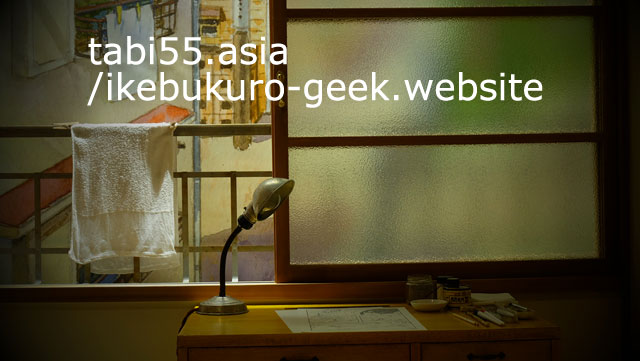 Room 19 is a reproduction of the room of Mizuno Hideko, the only woman at Tokiwaso. 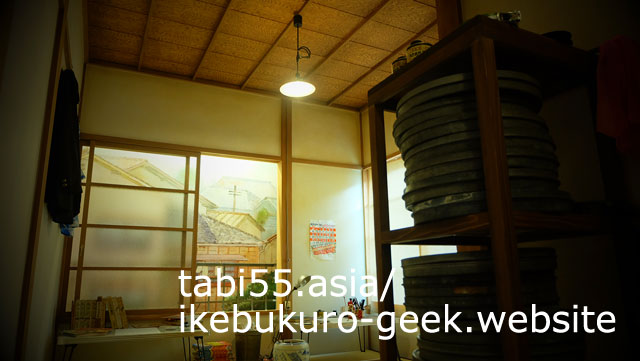 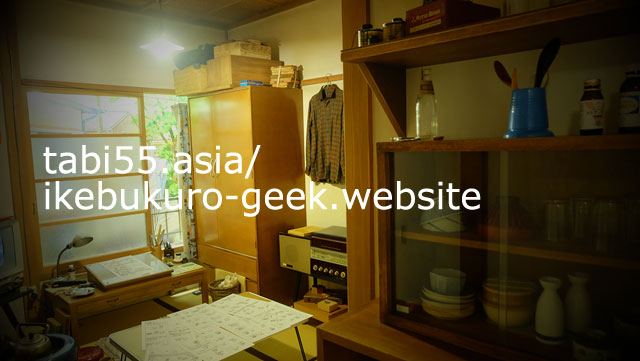 Recommended for those who are interested in “Japanese life in Showa”.

5-5.A room where you can become a manga artist and take a commemorative photo 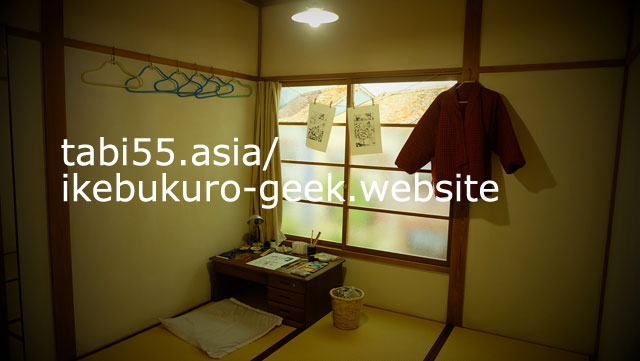 In Room No. 16, you can sit in front of the manuscript and begin to take a commemorative photo. 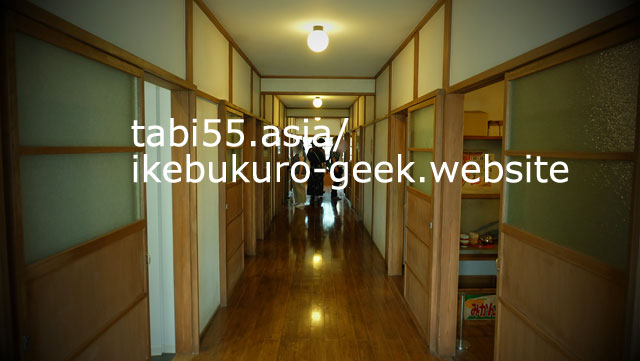 In the 1950s and 1960s when the manga artists lived at Tokiwa-so, there was no concept of “COOL JAPAN” as it is now.
It was a time when the manga artist himself was established as a profession or not.
How encouraging youths with the same aspirations gathered in one place and worked hard together.

If you are not just a manga lover but a “future person” visits, you may get courage.
You can also learn about “Japanese life in the Showa era”.
Recommended for those who are interested in Showa Retro.

The Tokiwaso Manga Museum does not have a museum shop function.
To purchase souvenirs and other goods, go to the nearby “Tokiwaso-dori Oyasumi-dokoro (described later).

The old address of Tokiwa-so was “5-2253 Shiinamachi”.
Therefore, it is easy to think that “Shiinamachi station is the closest station”.
However, there are actually closer stations.

7.A place I want Tokiwaso fans to visit 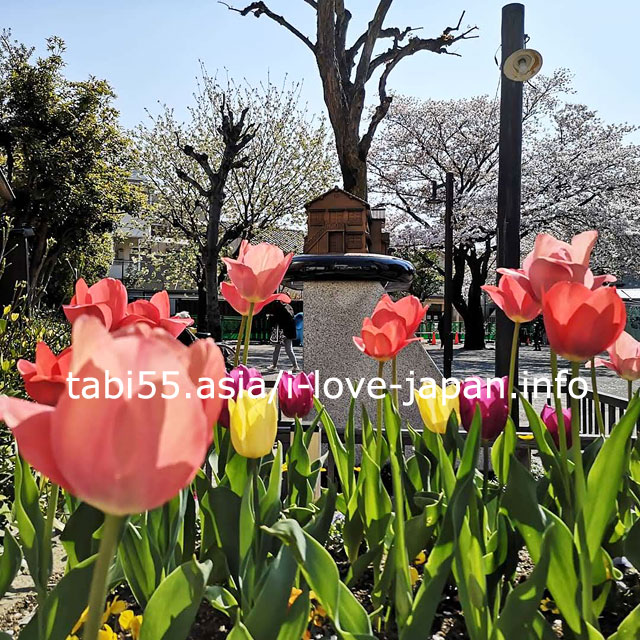 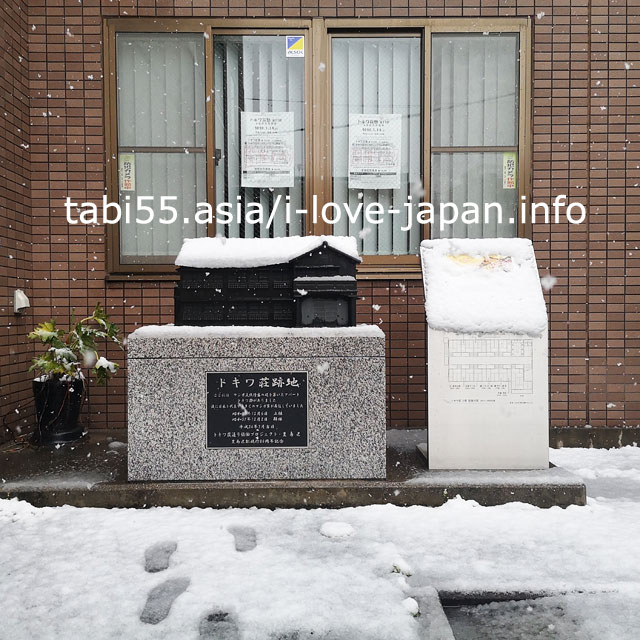 In 2012, a monument was set up for fans visiting the “Sacred Place of Manga” to indicate the “former site of Tokiwa-so.”
The Tokiwaso Manga Museum was built in a nearby park, and the real “Tokiwaso Ruins” is around here.
If you walk through the alley in front of “Japanese Chinese Matsuba” in the photo below, you will see it on the right.
As you can see, it is right next to a private house.
let’s see with a mature attitude. 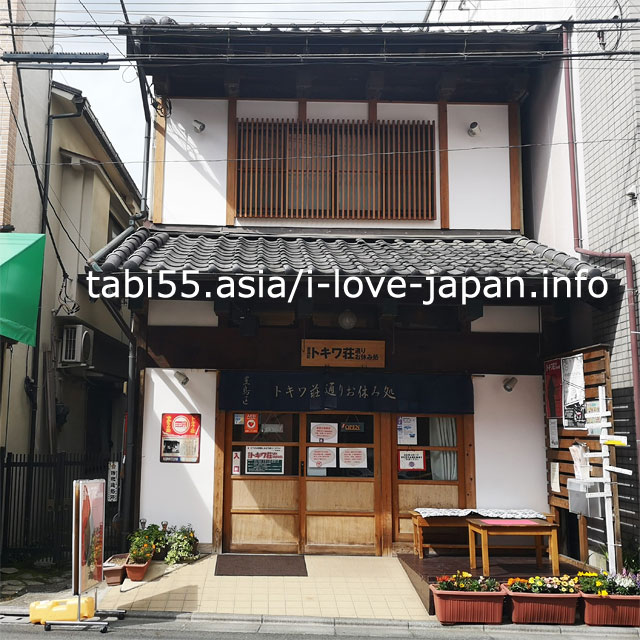 This is a guidance facility that opened in December 2013 to provide a place for fans to visit the areas associated with Tokiwaso.
On the 2nd floor, the room of 4.5 tatami mats room where Tokiwa-so’s reliable big brother:Terada Hiroo lived is reproduced.
It’s too nice to recreate the room of Tera-san (Terada’s nickname) instead of the famous manga artist.

By the way, We can shoot as much as you like.
We cannot upload to Social media.

Goods from the Tokiwaso Manga Museum are sold here.
Be sure to stop by. 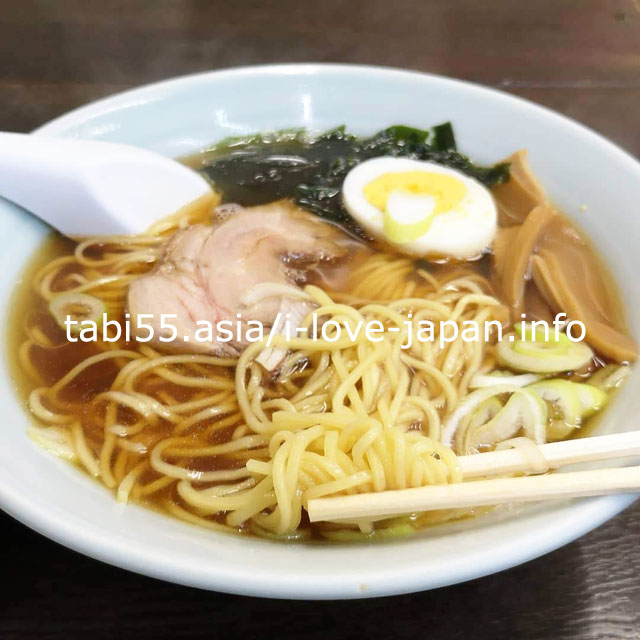 You can eat ramen at the shop where the Tokiwaso manga artists used to eat.

Ikebukuro is called "bukuro" by locals. The pronunciation of "bukuro" is similar to that of "FUKURO". The "FUKURO" m...

1.Basic Information about kyu-Furukawa Garden The Kyu Furukawa Garden is known for its Western-style house designed b...
Sponsored links
From Narita Airport to Ikebukuro Station by 【AIRPORT BUS TYO-NRT】
Character Cafe in Ikebukuro（Tokyo,Japan）