Omurice is a Japanese Western dish of cooked rice wrapped in egg like an omelet.
In general, ketchup rice is used for rice (with some exceptions).
The popular “Fluffy Omurice” on Youtube is called “Tanpopo Omelette” .
Although popular on Youtube, it is not very common as a Japanese omurice.


“Fluffy Omurice” on Youtube is called “Tanpopo Omurice”
Although popular on Youtube, it is not very common as a Japanese omurice…
Because it became known in the movie “Tanpopo(means Dandelion)” directed by Juzo Itami.

The “Tanpopo Omurice” will be provided in 3 minutes 48 seconds of the popular video on YouTube. 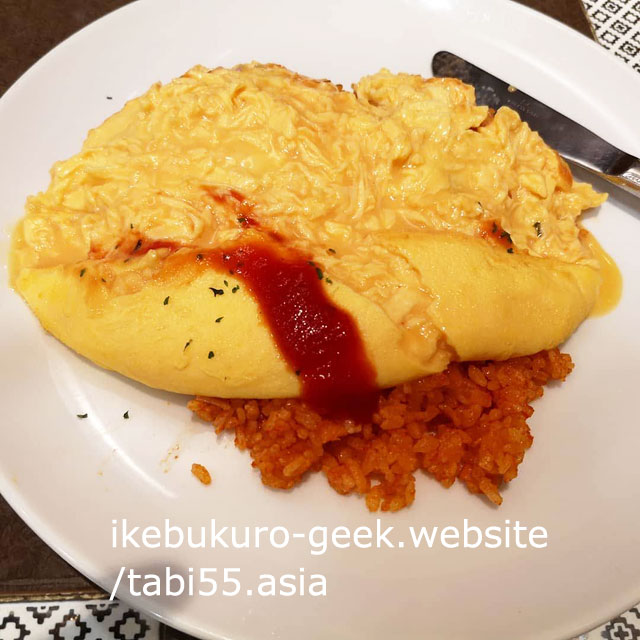 You can eat popular menus of Western restaurants in Nihonbashi at the eat-in corner on the first basement floor of Seibu Department Store.

Unlike youtube videos,
Not chicken rice but ketchup rice,
Ketchup instead of Demigra sauce

There is no English menu, so let’s go with friends who can speak Japanese. 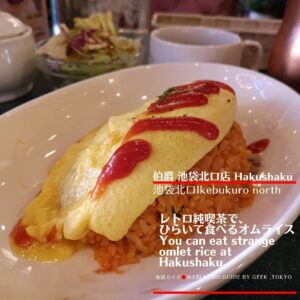 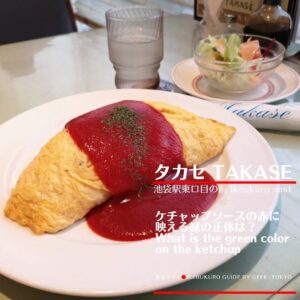 Takase is in front of Ikebukuro Station East Exit.
Takase is a long-established bakery in Ikebukuro that also has a restaurant.
I thought the green on top of the ketchup sauce was parsley, but it turned out to be aonori. 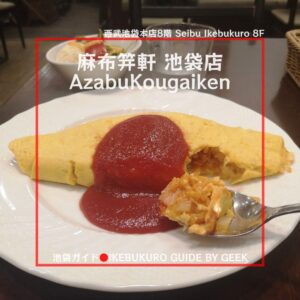 Although it says “Azabu”, there is a shop in Ikebukuro.
Interesting picture inside the store. 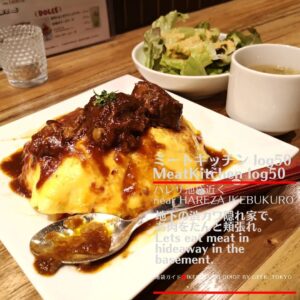 Let’s eat meat in the astringent and cute hideaway in the basement at Meat kichen log50.
It is near Hareza Ikebukuro. 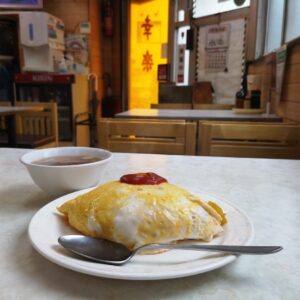 You can eat good #Omurice at koraku in Ikebukuro

Omurice is a Japanese rice omelette.
It’s an omelette stuffed with rice.
Sometimes there is also chicken and vegetables inside.
We usually put ketchup on it. 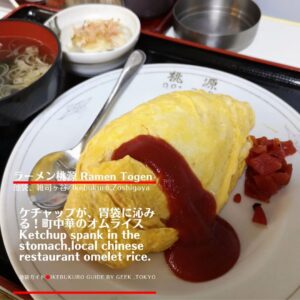 Omelet Rice at RamenTogen’s Ketchup sank in the stomach.

Ramen Tougen is a shop called “town Chinese”.
Chinese food is localized to suit Japanese people.
It seems that the repertoire has increased while responding to customer requests. 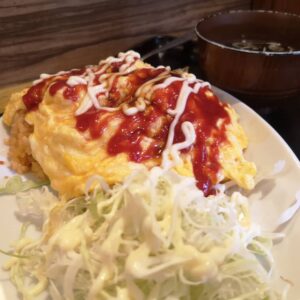 You can eat OmelleteRice with a cute shape at FukuroKoji in ikebukuro.

Not only ketchup, but also mayonnaise and sauce (*￣ー￣*)

The soup is delicious, probably made from soba broth. 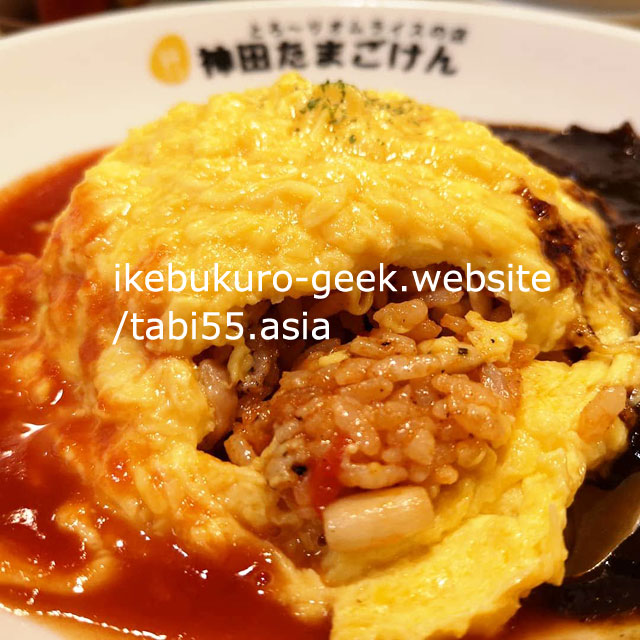 Light and fluffy scrambled egg covering a tomato-flavored chicken and vegetable pilaf.
You can choose your favorite sauce to go on top.

There is an English menu, so it will be easy to enter. 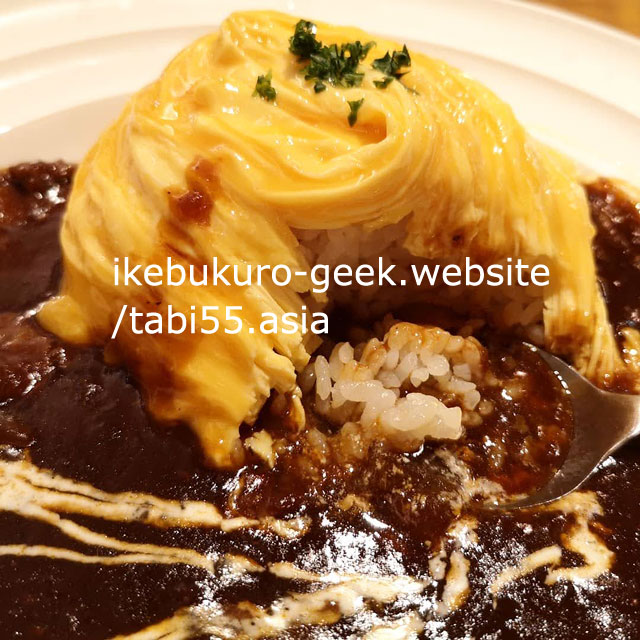 There was no English menu.
There is a picture on the menu, so let’s order it with pointing

They have no English menu
Take a photo with your smartphone and order with your finger. 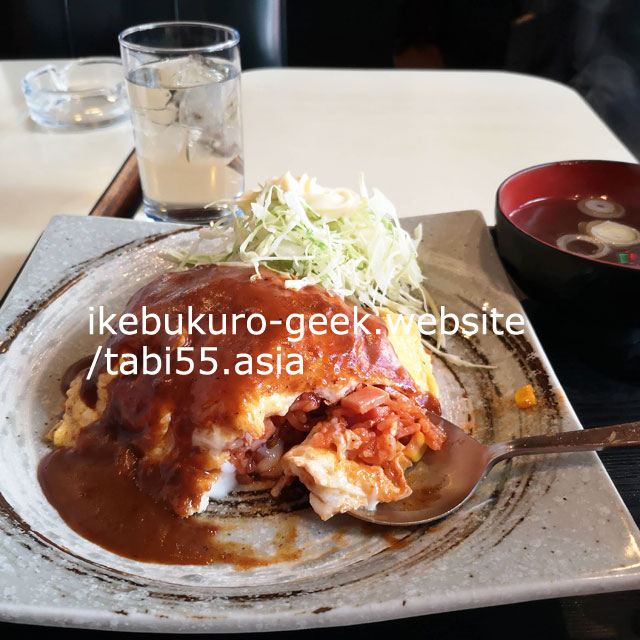 You can eat round omurice at sunhamana in Higashi Ikebukuro.
Maniac Chinese coffee shop in Ikebukuro… 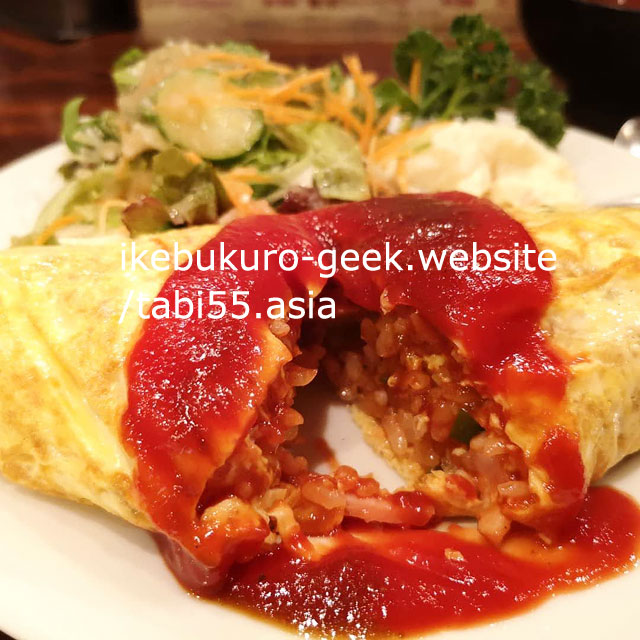 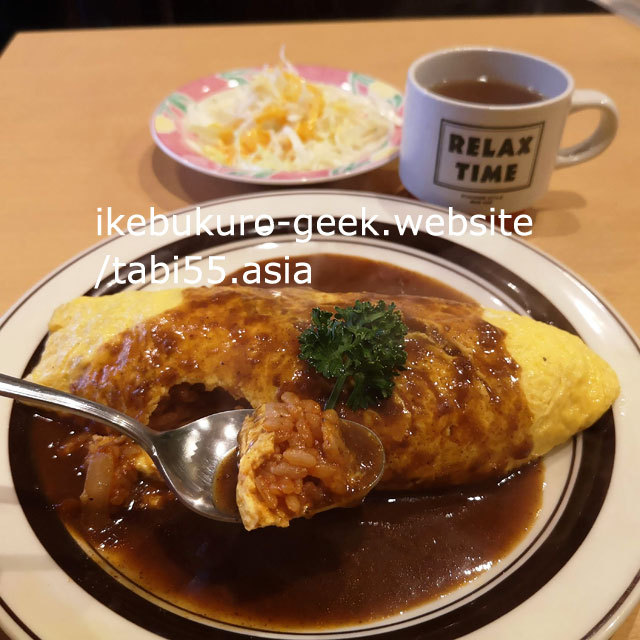 Grill Mozu is a Western-style (Yoshoku) restaurant that has been for a long time in Ikebukuro.
You can have Omelet Rice topped with demiglace sauce at grill MOZU. 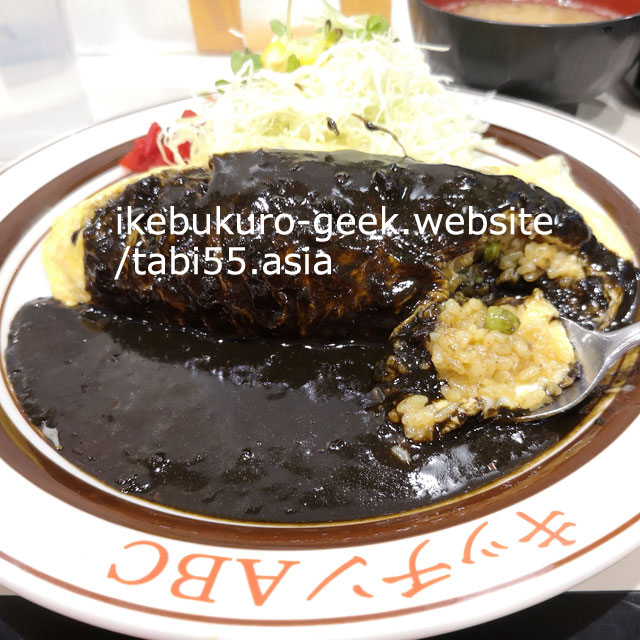 You can eat OmuCurry at Kitchen ABC in Ikebukuro .
It’s a drycurry wrapped in an omelet and topped with blackcurry .

※Ikebukuro has 【2】Kitchen ABC.
There are Kitchen ABC in east side,west side. 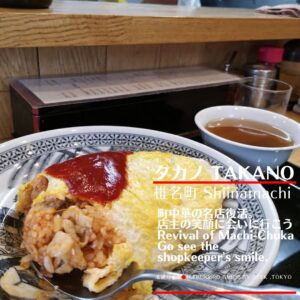 Takano is located at Shiinamachi Station, one stop from Ikebukuro Station on the Seibu Ikebukuro Line. 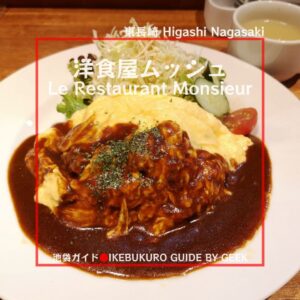 It is located at Higashi-Nagasaki Station, two stations from Ikebukuro on the Seibu Ikebukuro Line.

It is a “Yoshoku” restaurant loved by the people of Higashi Nagasaki.
Yoshoku is Japanese food that localizes Western food to suit Japanese people. 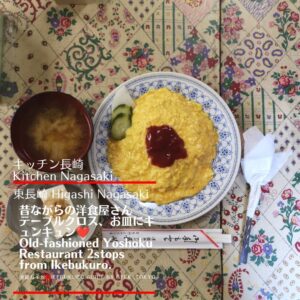 It is an old-fashioned Showa retro “Yoshoku” restaurant.
Tablecloths and plates make my heart beat. 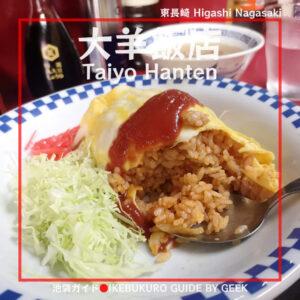 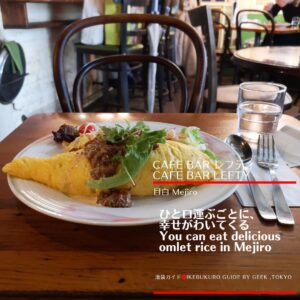 Lefty is a cafe bar located one station away from Ikebukuro Station on the JR Yamanote Line.

I will share a unique ramen restaurant that does not fit in the usual categories. 1.Mendokoro Ippaku／麺処いっぱく ...

Hamburg Steak is like hamburger without bread. It is minced meat baked with onions, bread crumbs, etc. and then sauce. ...

Gyoza is one of the Chinese dishes from China. In China, Boiled gyoza and steamed gyoza seem to be the main. In addit...

Spaghetti Napolitan is a Japanese pasta dish, not an Italian or Naples dish. There is a dish called "Spaghetti alla Nap...

Here is a ramen that has been seasoned with soy sauce, a seasoning widely used in Japan. 1.Ikebukuro east SoySource（s...